"I want you to stop being subhuman and become 'yourself'. 'Yourself,' I say. Not the newspaper you read, not your vicious neighbor's opinion, but 'yourself.' I know, and you don't, what you really are deep down. Deep down, you are what a deer, your God, your poet, or your philosopher is..."
— Wilhelm Reich


Everyone is dying to know, “What’s inside the [SSEX BBOX]?” The [SSEX BBOX] holds the questions you are afraid to ask about GENDER, SEXUALITY, and RELATIONSHIPS! Let us introduce you to the queer artists, sexperts and exceptional human beings who are defining the answers. These individuals are leading the queer revolution, making sex fun, sexuality accessible, and gender even more complicated!

Based in San Francisco, São Paulo, Berlin and Barcelona, [SSEX BBOX] is a web documentary series. [SSEX BBOX] pocket-size zine is the tangible manifestation of this web documentary series aiding in the continual queering of our culture. It is our goal to expand consciousness by questioning the archaic and obsolete patterns that bind us to our two-dimensional understandings of gender and sexuality.

Our first issue, “Genderly Phrased,” celebrates the diversity of queer gender expressions. Gender is as complicated as biochemistry, it’s as vast as the galaxy, and it is as unique as a snowflake. We thought it would be fun to explore gender beyond the linear perspective of masculinity and femininity, and talk about gender from a more dimensional perspective. What other elements form your gender? Maybe you have seahorse energy; perhaps you are pulling in androgynous aspects; or maybe your gender has elements of color. It’s complex and deserves some exploration...

[SSEX BBOX] pocket-size zine will use beautiful imagery, moving stories, and highlight some extraordinary individuals to celebrate the magic and dynamism that is gender. All we ask is that you keep an open mind and heart, and that you have fun!

GENDER IS A TEXT FIELD

In one hand, as developmental psychologist Gertrude Wyatt once remarked, the “symbolic transformation of bits of reality into language [is] part and parcel of the individual's ego development.” If we can accept that, then finding our own words is more than merely good communication, it’s literally necessary for growing up human. There is no more universal human experience than that of describing one’s own identity.

It is now our words, in the form of programming languages, that are driving the evolution of technology. The corpus of this technological literature changes our physical reality, offering us everything from hormone therapies to space shuttles to online social networks. And as new technologies are developed, technology itself mimics its creator.

Except, that is, in at least one very crucial arena: the description of ourselves. To our technology, our genders are among our most baffling human properties. The binary coarseness with which our technology encodes this information should serve as a humbling reminder to anyone arrogantly proclaiming humanity’s superior intelligence; if your laptop’s screen can display millions of colors, why can your Facebook profile only display one of two options for gender?

Today’s standard for such things is defined in the International Organization for Standardization’s specification titled “Information technology — Codes for the representation of human sexes,” referred to as ISO 5218. This worldwide standard, most recently updated in July 2004, defines 4 mutually exclusive options: “male”, “female”, “not known”, and “not applicable”. It’s a simple scheme that takes a total of 2 computer bits to record.

That’s woefully inadequate—and we can do better. But how?

One early attempt called “Yay! Genderform” offers you 947 options using checkboxes, which allows you to combine each option with any other option for “a total of 1.1896×10285 or 1.1 quattruornovemgintillion possible combinations, more than there are elementary particles in the universe. If each option were a computer bit, it would take 119 bytes to encode a combination.” Though a good illustration of the problem space, staring at an interface of 947 possible boxes to check isn’t merely practically unusable, it fails to free us from the flawed paradigm’s constraints: we need to break out of boxes altogether.

A simple interface can be a gateway to endless possibilities. Take, for example, Google’s famously simple homepage; using just a single text field, Google gives you access to the entire searchable Internet. So, too, can a text field access the symbolic gender galaxy—or at least a coordinate within it.

The words we use to communicate are the tools with which we teach each other—and our software—about ourselves, who we are, who we like, and why. Designing sexist systems might sound brain-dead, but it’s actually how many people think of gender issues in their mind. They quite literally don’t see different humans as being equal; when two men marry, they need to figure out “which is the wife” and so they literally imbue the code they write, and the technology they build, with rigidly gendered, technically inaccurate world views.

Ultimately, it’s up to us to build a world where we can either limit or accept the possibilities of the people we interact with. Therefore, we ought remember Internet pioneer Jon Postel’s Law: “be liberal in what you accept.” Put another way: don’t limit us with boxes, because, as Eddie Izzard said, “there’s gonna be a lot more guys with makeup during this millennium!” 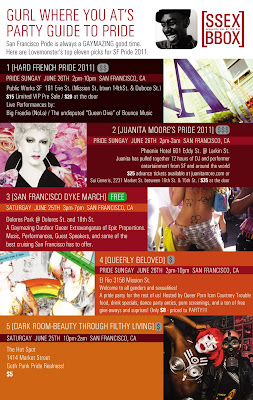 Don't be overwhelmed with what to do during Pride Week! I've done all the work for you! Here is my top 11 picks for this weeks Pride Celebration. It's going to be GAYMAZING <3<3<3 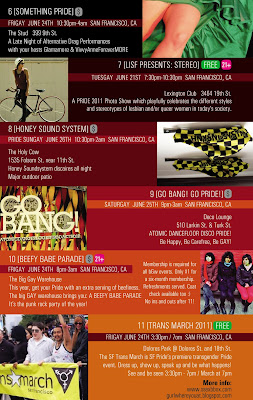 Posted by Lovemonster at 2:36 PM